Prayer Request: Monday 27 July 2015 – Joseph has one of his lumbar punctures with a preventive chemo treatment of his spine. Please pray for him to handle the treatment well and for it to be effective. 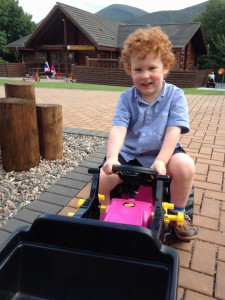 Since the last update many things have happened and we are happy to report that Joseph is doing well tonight but there have been a few ups and downs along the way.

The liver function test that was done the week after the last update showed improved liver function but his neutrophils bottomed out. So he was taken off all chemo for a week. That was on a Wednesday. On Friday afternoon – about the time the boys go down for a nap, Kate came in to my office at home and said, “Joseph has a fever.” That phrase causes an automatic action plan to go into force. I was on a call with my team and had to excuse myself. Then I called the hospital to tell them what was happening – that number is on my speed dial. They told me that we should bring Joseph right away, bring our suitcase and plan to stay. We keep a packed suitcase by the door for just such a situation but it needed to be refreshed with a couple of things. I got the car ready and got Joseph ready to put in the car. While Kate was refreshing the suitcase she was explaining to the other boys what was happening and encouraged them to pray for Joseph.

Just as Kate was bringing Joseph out to the car, Moses (Joseph’s five year old brother) came up and said, “Mummy please check Joseph’s temperature. I have been praying.” So Kate checked it with the ear thermometer. The first ear was no longer above the fever threshold. She checked the other ear and it was still above the fever threshold. To this Moses said, ” OH, I have to go and pray for that other ear!”

I got Joseph strapped into the car and took him to the hospital. Upon arrival they took a blood sample and his vital signs. The results of the neutrophils were a huge surprise: 4.1. This was the highest they had been in over a year. Just two days before, his neutrophils were 0.3. It was expected, with that very low result on Wednesday, that he would be at 0 with an infection running wild. When I looked at the nurse in disbelief at the number 4.1 she smiled and said, “his body it doing what it should do – it is fighting the infection”.

Then the next surprise. Joseph’s vital signs showed his temperature to be below the fever threshold. When the doctor examined Joseph she found an infection in that stubborn ear that Moses was praying for. Suddenly our whole situation changed. Joseph did have an infection but his body was fighting it and he did not have a fever. So the decision was made to provide us with an oral antibiotic and allow us to go home and monitor Joseph’s progress.

At this point it was time to close the clinic so we were invited to come and wait in the Hematology ward until our medicine came. As we walked down the corridor to the ward, one of the nurses asked me how I felt about coming back to the ward where Joseph had been initially diagnosed and treated. I told her that it was a strange feeling and I was not sure if I could really explain it, but I just had a great sense of peace and comfort. We had been so well cared for in the past and were being cared for so well now.

While waiting for the medicine, we met many nurses who had cared for Joseph a year and half ago. They were all thrilled to see him with a full head of hair and looking well. When the antibiotics arrived we were free to go home. On the way Joseph fell asleep in the car, making up for the nap he had missed. When we walked in, Joseph was ready to play and Moses was so excited to see Joseph home and without a fever. His prayers had been answered – even for that stubborn ear.

But Jesus said, Suffer little children, and forbid them not, to come unto me: for of such is the kingdom of heaven. Matthew 19:14 KJV

Moses’ prayers for Joseph reminded me of when Jesus was approached by a group of children. The disciples try to keep them away from Jesus but he tells them to let the little children come to him. Here Jesus is not talking about heaven only being for children, but for those who really love and trust Him the way any child would. Jesus is saying the same thing in regard to you today – He is telling everyone to not hinder their approach. You don’t have to be pure – He will handle that. You don’t have to know theology – you just have to know Jesus and Heaven will gladly receive you.

3 thoughts on “An Ear and a Prayer”