For the past few years our family has gone to the Snowman Concert here in Belfast during the Christmas holiday season.

The Ulster Orchestra performs the music from the Snowman, an animated children’s special, in the Waterfront Hall in the heart of Belfast. Families from all over Northern Ireland fill the hall for two special performances.

This year we planned for Kate to take the two oldest boys and I would stay home with Joseph and Ezra. But it just seemed sad for Joseph not to be able to get out for such a fun time with his brothers. However, with his immune system suppressed, a big gathering like the Snowman Concert would be the last place we could take Joseph.

However, I wrote to the Waterfront Hall and asked if there was any kind of private viewing area where we might be able to bring a child with a suppressed immune system to see the concert. To my surprise, they responded that they were able to make an accommodation for us and we could come as a family.

When I met Hama O’Reilly (the Waterfront Hall Duty Officer) at the ticket office, I was not sure how all of this was going to work. But quickly I could see that she had really thought through what our needs would be. We were taken in a side entrance between the performances when the building was mostly empty, and then ushered into the staff only area which was completely void of people. We were then led down a corridor to an unmarked door. Once inside we saw this sign:

Behind this door was a private room that had 3 glass walls and looked directly over the Orchestra. We had an amazing view and were totally sealed off from the crowd. 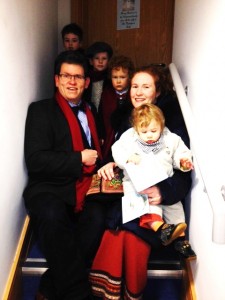 What the Waterfront Hall had done was convert a technical sound room into a private viewing box for our family so that Joseph could participate in the concert.

At the end of the concert there is always a round of Christmas songs and then giant “snowball” balloons are dropped into the crowd and bounced around the concert hall.

Well, the Waterfront Hall staff did not miss a detail. They had installed a Christmas tree just for our family and provided a giant “snowball” balloon as well!

After the concert hall had cleared, Hama and her team escorted us out the side door between events to our car parked nearby. The whole event was a wonderful piece of logistics that kept Joseph safe and allowed him to experience the concert with his brothers.

What an amazing experience to have Joseph with us for the first time in a year and half at a public event. Hama O’Reilly and her team at the Waterfront Hall showed us such warmth and thoughtfulness.  A real reflection of the love and care the Lord exercises in each of our lives.