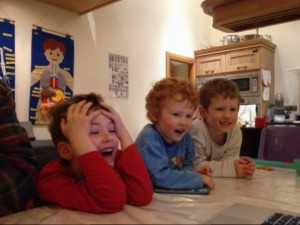 After the visit to the hospital on Friday evening, Joseph was sick again on Saturday. Then on Sunday he had no sickness and no fever. However, he was only able to take fluids as his tummy was so edgy that he was not interested in solid food. On Monday Joseph took a few light things – a bit of rice, things like that and made it another day with no fever and no sickness. Because Joseph had not been sick for over 36 hours he went back on oral chemo Monday night. By Tuesday he was starting to catch up on his food. He was really hungry after about a week with no solid food.

Wednesday we went in for a normal check up and Joseph’s blood work was just where the doctors wanted to see it. Then a comment was made that caused me to pause. “It is good to see Joseph’s neutrophils at a good level after a virus like that. So often children will see their neutrophil level drop to zero with a virus.”

Once the doctor had said that I remembered that last year we kept waiting for Joseph’s neutrophils to come up enough to come home from the hospital after his intense initial treatment and I asked what could cause neutrophils to stay low and the most common answer was “a virus”. Here Joseph clearly had a virus, YET his neutrophils actually went UP to help his body fight the virus.

So here we were with Joseph not feeling well, many people praying and Joseph’s body working far better than would normally be expected to fight the virus off.

It reminds me of this event from the Bible:

When the servant of the man of God rose early in the morning and went out, behold, an army with horses and chariots was all around the city. And the servant said, “Alas, my master! What shall we do?” He said, “Do not be afraid, for those who are with us are more than those who are with them.” Then Elisha prayed and said, “O LORD, please open his eyes that he may see.” So the LORD opened the eyes of the young man, and he saw, and behold, the mountain was full of horses and chariots of fire all around Elisha. 2 Kings 6:15-17

Here there was a physical army totally surrounding a city and of course people felt helpless and afraid. But when the prophet saw that his own servant was afraid he asked God to open the young man’s eyes. A strange thing to request as the young mans eyes were working just fine – he could see the army all around the city with no problem. But  the prophet was talking about was spiritual eyesight, the ability to see the reality that was all around them that was not normally visible. What he saw was an angel army that was immeasurably more powerful than the human army that surrounded their city. Suddenly the young man could understand that what seemed like “reality”  was superseded by a spiritual reality of which he had been unaware.

Many people speak of being “realists” and dealing with life “as it is”. However, this young man found that there was a lot more to “reality” than he ever imagined.