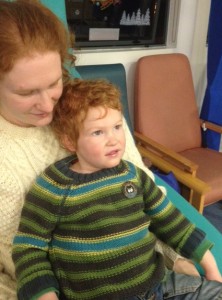 After returning home from the hospital Wednesday night Joseph slept well until about 3:00am when he was sick. However, he recovered quickly and slept the rest of the night. On Thursday morning Moses came down to check on Joseph and said, “Well, I will keep praying!”

During the day on Thursday Joseph was able to drink water but not able to hold down solid food of any kind. He then slept very well Thursday night and Friday morning was able to have a bit of toast for breakfast and has been drinking water throughout the day.  About noon we noticed that Joseph was uncomfortable and we took his temperature, which was 38.8C. His safety threshold is 38C so we called the hospital. They suggested that he continue drinking fluids and take rest and be given some paracetamol. If the temperature were to come back up, or he was to be sick again, we should call back. Then after having a good nap Joseph got up for dinner. We were at the table and he had a couple of bites of something light and was immediately sick. We took his temperature and it was back up to 38C again.

After calling the hospital again they said it sounded like it was still the virus working in his system but that for safety we should come in for a check up. So I am writing this from the hospital as Joseph is having a blood test done while sitting on Kate’s knee. Today, Marie, Kate’s mum came by for a visit and is able to stay with the other boys while we are here for tests. We have our suitcase in the car should we need to stay but are hopeful that we will be able to go home if there are no secondary infections.

Joseph needed to have an canula inserted into the back of his hand so that blood sample could be taken. The doctor and nurse commented on how Joseph did not wiggle, flinch or cry when this needle was inserted into the vein on the back of his hand. Then later the doctor needed to have Joseph stick out his tongue so that he could see the back of his throat. Joseph managed to move his tongue in every direction but the right one. Later Kate and were talking about that and came to the conclusion that we had never taught him how to “stick out his tongue” so he really did not know what to do in response to that request.

Joseph’s blood results are now back and show that he is able to continue fighting the virus without being hospitalized. It is midnight and Joseph is very tired and looking forward to his “wee bed”.

Our prayer request would be that the virus would leave his body soon so that he will fully recover.

We are grateful that Jesus is sustaining Joseph and that so many are praying for Joseph. We are also grateful for the Lord’s provision of  dedicated and skilled doctors and nurses who were so kind and through in their care for Joseph. With sense of peace we head off to bed and recall this verse:

In peace I will lie down and sleep,
for you alone, Lord,
make me dwell in safety. Psalm 4:8