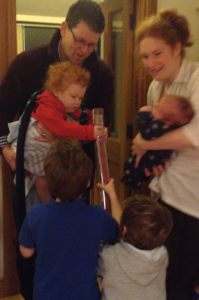 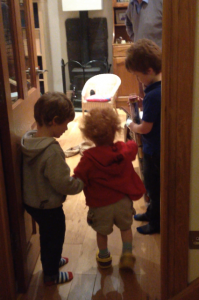 The last three days were full of activity and uncertainty. Results of Joseph’s blood tests were going in the wrong direction for two days for him to be released to go home. There were also many preparations still to be made at home and we needed to be certified on safely maintaining Joseph’s line.

On Thursday it just did not seem possible that Joseph would be able to come home this weekend. His blood test results had gone down again. But later that morning one of the nurses asked me, “Were you able to get all the classes you needed to take care of Joseph’s line?” I told her that it did not look like things were going to come together for him to come home this weekend. She then said,” Well, I have certainly seen stranger things happen.”

That was when I realized my focus had shifted from what the Lord was doing to the limitations of what I thought was possible. Faith. That is what was needed.

Could I believe that the Lord could still bring Joseph home this week? Certainly He could if He chose to do so, but what would that require of us? We needed to be ready for the Lord’s action. So I called Kate and asked if she could come down for another lesson on Joseph’s line. She called friends at church and in a hour it was all arranged: two sets of people helping at short notice to watch the older boys and to help keep Ezra at the hospital so Kate could feed him when needed. Kate arrived and got trained.

Then we needed to get a number of things sorted out at our home and Kate’s father and brother David came down to do those things. I needed to get one more training in on Friday morning for Joseph’s line and the nurses created an impromptu class for me.

So by late Friday morning we had done or had in progress everything we needed to do to care for Joseph if he could come home. Now it was in the Lord’s hands.

When the doctors made the rounds on Friday they told me, “Joseph’s  blood test results are still low but they improved slightly. We have been discussing his situation and think that some of the other medicine that he is on is slowing down the response of his bone marrow. So we will remove that and send him home. He is so healthy it would really be better for him to be at home. If anything happens you can just bring him back.”

We were going home! And it had come about in the fullness of time, just when the Lord was ready. What a pity if we had not done our part in faith – we would still be at the hospital as we would not have been able to receive Joseph.

Once all the paperwork was done at the hospital Marie came to pick up Joseph and me. When we arrived home the boys were so excited. The first thing we did inside the house was introduce Joseph to Ezra. Joseph reached out to Ezra and began to pat his tummy. Both Elijah and Moses exclaimed “Joseph is a big brother. He is being kind to his little brother – Good boy Joseph!” Then Moses cried out “JOSEPH IS HOME!”

The first photo is Elijah and Moses giving Joseph some wee cars as a coming home gift. The next photo is the brothers walking off together to play and the last is Marie later sitting with all three boys on the sofa – enjoying the fruit of her labors – 35 days of  12 hour shifts caring for Joseph in the hospital.

Last night Joseph ate very well. It was really our first family meal since Ezra was born. It was, by the way, a donated meal from friends at church – one of more than 30 we have eaten this past 5 weeks.  After dinner the boys played and we all had a great night of sleep.

While it is wonderful to have Joseph home, he is still VERY much at risk of infection. We are monitoring Joseph’s temperature twice a day and it has been great. Then on Monday he will be fasting again for a visit to the surgical theater as an outpatient. He