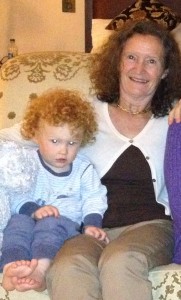 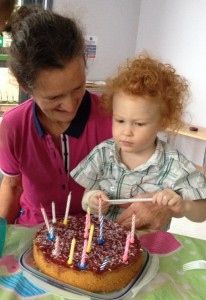 Internet access at the hospital was down again for me the last two days, so this is a catch up posting.

Marie is Joseph’s grandmother, better known as Nanna at our house. She has always been a delight to our boys as she is just as likely be to found jumping on the trampoline with them as knitting a hat or scarf. Though she has a very full life and schedule she has always made time each week to spend time with the boys and always has some healthy treat to share with them. The photo on top is Marie sitting next to Joseph during a family weekend away a couple of months ago. The photo below it is Marie celebrating her birthday with Joseph in the isolation ward of the Children’s Hospital in Belfast a couple of weeks ago.

Because Kate just had Ezra and is breastfeeding it is not possible for her to spend long periods of time in the hospital with Joseph. Knowing that I would not be able to stay with Joseph 24/7 on my own, Marie cancelled all her work shifts for the month of November and has been doing the 12 hour shift at night caring for Joseph this past month. Before that when Joseph was so ill at home, she came and stayed with us for two weeks before Ezra was born to care for Joseph. Many times she was sitting up all night with him, so she has actually been on the long night shift with Joseph for at least a month and a half.

Of course Joseph loves his Nanna and is very comfortable being cared for by her during the night. But what Joseph does not realize is his Nanna is a trained nurse as well, so he has had the privilege of personal nursing care. I’m sure that it never entered her mind when she was training to be a nurse that she would be using her skills for her grandson with leukaemia.

What is best of all about Nanna though is her walk with Jesus. Joseph did not just have a personal nurse each night but a grandmother who was praying through the night watches.

Marie is an example of what many families miss out on in our rushed lives that often do not have room for grandparents and extended family. What a blessing to have a heritage of faith that can be passed on to grandchildren.

But the mercy of the LORD is from everlasting to everlasting upon them that fear him, and his righteousness unto children’s children; To such as keep his covenant, and to those that remember his commandments to do them. 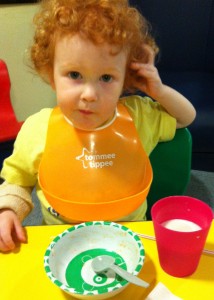 Highlight: Joseph has continued to grow in strength each day this week.

Highlight: Joseph has had a very sore mouth as the result of the chemo, but in the last two days has had significant healing and has been doing better.

Highlight: One of the side effects of the chemo is a loss of appetite. It is not really a lack of hunger but the taste of things change and nothing seems very palatable. Some friends gave us a sweet and sour pork dish and Marie tried it with Joseph. The results speak for themselves – clean plate!

Highlight:  The doctors told Kate and I today that they wanted us to come in next week for some training on how to care for Joseph’s semi-permanent line. This will be in preparation for Joseph coming back home for much of his treatment.

Joseph had some raw places in his mouth early in the week that were due to the chemo treatment. This made it extra difficult for him to find food interesting. However, in the last couple of days, extra mouth treatment and trying a wide variety of food options has seen his mouth improve as well as his eating.