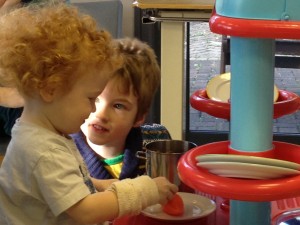 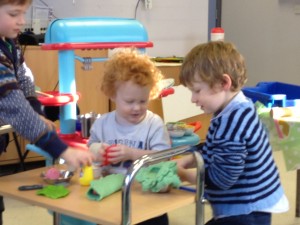 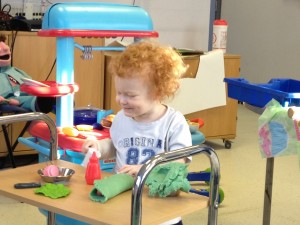 I did not have Internet access in the hospital over the weekend so this posting will cover 2 days.

Highlight: The brothers were able to have a get together again on Saturday morning for half an hour. Once again they made the most of the time.

Highlight: On Sunday Joseph was right on the border of having a “fever”. Then during the evening his temperature would rise just into the warning range and then drop back down.  This is being closely monitored by the medical staff.

Highlight: We were able to set up a “Facetime” between Joseph and Kate & Ezra (his new little brother) on Sunday night. Joseph saw Ezra for 2 days before being admitted to the hospital so we were not sure if he remembered Ezra or not. Joseph was full of smiles to see his little brother and mummy.

As you can see from the photos the boys had a great time on Saturday morning.  This time the situation was more familiar and Joseph was stronger so they just jumped right into play. Many delicacies were created that morning in the kitchen together but the smiles and giggles were the best part of the day for everyone.

Joseph is just starting to speak so it has been fun to walk the halls of the hospital ward and hear him practice a few words. He is also pointing to things and asking for their name A LOT. So I can be heard muttering as we walk down the hall together ” door, blood pressure cuff, IV pump, medical supplies,…” It will be quite an interesting vocabulary for a 2 year old to have.

Saturday we found a lovely park just outside the one of the gates to the hospital grounds. So now a visit to the park while out in the buggy is part of the daily routine, unless it is raining.

On Sunday Joseph’s temperature was bordering the warning range then jumped into and out of the warning range a couple of times. So far there does not appear to be great concern medically and he is doing well. So we are waiting to see if this is some fluctuation or the first signs of an infection.

Prayer Request: That Joseph does not develop an infection.

It is hard to believe that we are entering our fourth week in the hospital. Now I am starting to learn a bit more about leukaemia. It seems, in some cases, it can all start with just ONE bad cell that does not respond properly to the body’s control mechanisms. This cell then creates just one more exactly like itself and then those two do that again and again and again. Soon the bone marrow is so full of these harmful cells there is no room for the normal bone marrow cells that supply our blood and core of our immune system. It struck me how this is a picture of what sin is like. Most of us can’t see the harm in “little sins”, yet it was Adam and Eve’s choice to disobey God in what to eat and not to eat that broke the universe. Such a little thing, yet within one generation one of their sons would murder his brother.  Just like tiny leukaemia cells, that on their own seem harmless, so “little” sins soon choke out and destroy just like “big” sins like murder.  Thankfully, Jesus came to pay for all our sins, “little” and “big” as both are deadly.

Jesus paid it all. All to Him I owe.

Sin had left a crimson stain;

He washed it white as snow.

4 thoughts on “The Brothers Together Again”