Joseph teaching his little brother how to tidy “so gently”

Answer to Prayer: Joseph has been sleeping much better – thank you for your prayers.

Prayer Request: Joseph has a Lumbar Puncture scheduled for the 10th of November, please pray that he will have grace for the fast that day and that he will tolerate the chemotherapy of his spine well.

It has been just over a year since Joseph was diagnosed – that occurred on 21 October 2013, four days after his younger brother, Ezra, was born. With one full year of treatment behind him and two more years ahead, we have been taking some time to reflect on God’s goodness to Joseph. 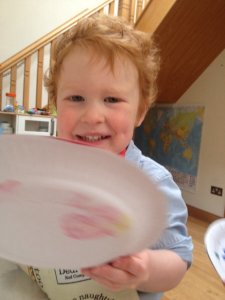 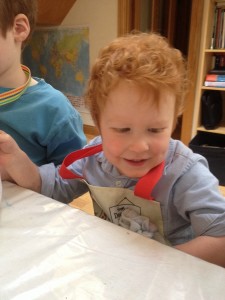 When he was diagnosed with Leukemia, Joseph was also found to have a deadly infection that there really was no way to treat. We cried out to the Lord and asked people to pray that the Lord would preserve Joseph. In response to that request, thousands and perhaps tens of thousands of people in over 20 countries prayed for Joseph. What has been just as amazing to us a year later is the number of people who still pray for Joseph on a regular basis. Everywhere I go I am greeted with the same question “How is Joseph?” and that is soon followed with “I am praying for him” or “My Bible study is praying for him”.

Does that prayer matter? Is it not, at this point, just a medical issue? Well, for a year we have had a bag packed by the door so that we can go the hospital, day or night, should Joseph develop any type of infection. Yet, even when Joseph was in his most intense chemotherapy and was expected to acquire an infection, he did not. Over this past year there have been several times when Joseph’s immune system was not just suppressed but almost totally shut down – yet each time he was spared an infection. Even this week, one of Joseph’s brothers woke up in the middle of the night with a fever and vomiting. All the boys share a room and our first thought was – “Lord, please continue to protect Joseph”. We placed the sick brother in my home office and monitored his fever. With two days of sick tummy and intermittent fevers we were just waiting to see if it would spread though the family and to Joseph – yet the sick brother rapidly recovered and no  one else has gotten ill.

Along with all that prayer has been much help from the Body of Christ, His church. In the first weeks of Joseph’s illness, members of the church we attend  brought us meals every day, washed our clothes, ironed shirts, cleaned our home, made the beds, helped care for our other children when Kate could go to the hospital, sent encouraging notes and texts, even donated blood to the hospital when they realized how critical this was to Joseph and other children like him. Since then many have continued to check on us and encourage us. Often people are concerned that it is very hard for us to get a break as a family – for where could you go with a child with a suppressed immune system? But again an amazing provision was made. Here in Northern Ireland there is a retreat home that has been purpose built for families who are dealing with cancer. It is a state of the art facility – the only one of its kind in all of Europe and it is about a hour’s drive from our home. We were recently able t