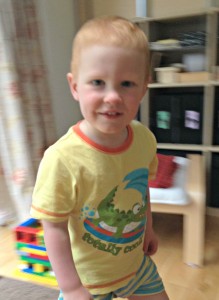 Highlight: Joseph’s line was successfully removed and he has been preserved from infection despite having almost no immunity several times.

Prayer Request: That the balance between Joseph’s bone marrow and the chemotherapy would stabilize; for continued protection from infection; and for protection during Joseph’s next lumbar puncture on 18 August.

Thank you for praying for Joseph on Monday 9 June. He had a successful lumbar puncture and protective treatment of his spine and central nervous system. The doctors were also able to remove his semi-permanent line. When I went in to meet Joseph after he woke up from the anesthesia I found him chatting with the nurse and drinking a bit of juice.  Joseph looked down and found that “Mr. Wiggly” was missing from his arm and a new big bandage was in his place. I explained that “Mr. Wiggly” was all done and that Joseph did not need him any longer. I was not sure how Joseph would respond to this sudden change. However he was ready to go home and tell his brothers about “Mr. Wiggly” being gone.

Once Joseph’s wound healed from “Mr. Wiggly” being removed we decided to move Joseph back into the room with his brothers. This was a big change  from being in an impromptu extension to mummy and daddy’s bed. We were not sure how Joseph would adapt to being with “The Big Boys”. Yet, within a couple of nights Joseph was sleeping through the night. He was one of the Big Boys again and everyone was happier.

All along we continued to go in to the hospital every week or fortnightly for Joseph’s check up. A few weeks ago the results from Joseph’s blood test showed that his blood was moving back to a normal healthy range. This was a sign that his bone marrow was starting to recover and it is a signal to the doctors to increase the dosage of  his oral chemo drugs. After a week on the new dosage level, Joseph’s neutrophils crashed to 0.3. Anything below 0.5 means that he is at extreme risk of infection. Joseph was given a “chemo holiday” where he is taken off all his drugs to allow his body to recover. At home we double checked the packed bag we always keep by the door should be need to take Joseph to the hospital for an infection. 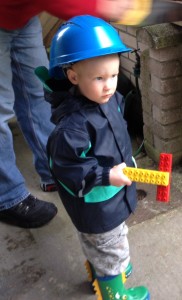 However, the Lord sustained Joseph again and he did not develop an infection. During that week the weather was lovely and Joseph and his brothers were very active outside. Joseph even helped me with a small woodworking project.

The next week we went back to the hospital to have his check up and his blood levels were back in “therapeutic range”. If a normal heathy person had these same numbers they would be considered VERY ill. However, for Joseph this is just the place they would like to keep his blood levels and the chemo drugs were started again. The reason for this constant treatment is that the doctors know that even though no leukemia can be detected in Joseph’s body now, there are very likely a few rogue leukemia cells roaming about his body. The chemotherapy is designed to kill those cells and prevent them from multiplying.  If the pressure can be maintained on the leukemia cells then eventually every last one of the rogue cells will  die off and his bone marrow will be able to grow back without any leukemia.  That is the reason that Joseph has more than two years of additional treatment ahead of him.