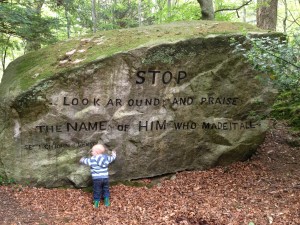 Highlight: On Monday the 9th of June, Joseph will have his next lumbar puncture with chemo treatment of his spine. If possible they will also look to remove his semi-permanent line. Please pray that Joseph does well during his time of fasting, has no reactions to treatment, and has no complications with the removal of his line.

It has been seven months since Joseph was diagnosed and he has been doing well these last few weeks. After delayed intensification was complete all of Joseph’s hair fell out. He also had very low neutrophil counts for a while as well. However, Joseph did not get any infections.

As Joseph stabilized we received a visit from the NICFC (Northern Ireland Cancer Fund for Children). They offered us a week at their new family retreat facility to get a break and refreshment. Joseph still has to take oral chemo every day and has a suppressed immune system and that means we cannot take him near crowds. What was amazing about the new NICFC facility is that it was designed for families with children like Joseph.

While at the lodge we often went out for picnics at various beautiful places near by. One of those beautiful places was Tollymore  Forrest  Park. The day we first arrived there, the parking lot was filled with film crews. They were there to film some episodes of the “Game of Thrones”.  Fortunately the forest is large and we were able to go on our walk without  meeting up with any of the film crew, so Joseph was not at risk of infection. While walking, we came upon a massive bolder with the following deeply carved into its face:

STOP and look around and praise the NAME of HIM who made it all.  John ch.1 v3

All things were made through him, and without him was not anything made that was made.

It is not often in life that one runs across a sign that weighs 50 tons telling you to remember that everything was created by Jesus. Yet Scripture tells us all of creation is saying exactly that all the time.

The heavens declare the glory of God, and the sky above proclaims his handiwork. Psalm 19:1

It reminds us that when we marvel at the stars at night, the ocean, the mountains, or are in awe of a butterfly wing, we are really admiring the creativity and beauty of the mind of God. It was this same mind who communicated to us through the Bible His kingship and our need for salvation from sin and brokenness.  But since we like to be the king of our own lives we tend to either worship the creation or worship ourselves.

How empty we make our lives and our souls when we close our ears to the shouts of His creation to worship HIM.

2 thoughts on “A Time of Refreshment”