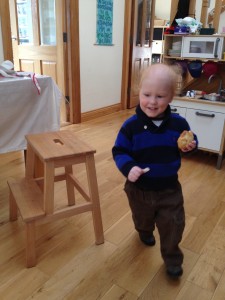 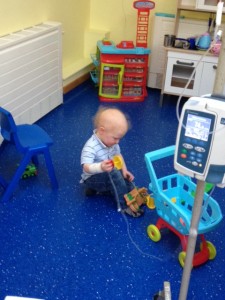 For the past two weeks Joseph has been on “holiday” from chemotherapy. His neutophil count was down to 0.1 so he was VERY susceptible to infection. But the Lord preserved Joseph again and he was well the entire two weeks. You can see from the first photo that he was really enjoying his time off from chemo. We found Joseph acting very much like he did before he was diagnosed. He was full of energy and liked to make wee jokes just to see if you were paying attention.

On Monday Joseph’s blood count was good, with neutrophils at 1.2. So he was scheduled to start the second half of delayed intensification.

On Tuesday afternoon I took Joseph in for his major infusion of this half block of treatment. Cyclophosphamide is a chemical decedent of nitrogen-mustard gas, a very powerful blister agent designed for use in warfare. An accident in WWII exposed several hundred troops to nitrogen-mustard and in the follow up medical care it was noticed that white cell production in the blood was suppressed. This led to the development of the very first “chemo” treatment for leukemia.

You might guess that infusing a chemical weapon agent into your two year old feels a bit odd. The amount of active agent is tiny but the list of really horrible side effects is long. To protect Joseph from as much as possible, they infuse extra IV fluids both before and after the treatment to “flush out” excess toxicity. This made for a long afternoon and evening of infusion. In the second photo you can see Joseph playing while hooked up to his drip on Tuesday.

The nurses warned us that this treatment can really make you nauseous so Joseph was treated with an anti-nausea medicine before his infusion and we were told to make sure and give him doses morning and evening for the next two or three days to help protect against strong nausea.

Joseph got two other drugs on Tuesday. One was Cytarabine, a drug whose active agent was originally extracted from Cryptotheca crypta, a sea sponge found in the Caribbean. Cytarabine is excellent at killing cancer cells but has its own long list of scary side effects. One of the less dangerous, but potentially inconvenient, ones is what is known as Cytarabine Syndrome, where the patient has a flu like reaction to the drug that produces a fever. This is not an infection but a type of drug reaction. Should Joseph have this reaction he would need to go into the hospital for 3 to 4 days of IV antibiotic treatment as it is not possible to tell the difference between a Cytarabine induced fever and one caused by an infection in the early stages.

The last drug of the day was Mercaptopurine, something that Joseph has had before. It was specifically designed to fool replicating DNA into using it as a building block for a new strand of DNA. However, Mercaptopurine does not behave well when incorporated into DNA and kills the cell. It too has a significant list of possible side effects.

All of these drugs share one property and that is they can have a serious impact on the immune system. So once again Joseph will be at high risk of infection during the last half of delayed intensification.

When I read the history of Cyclophosphamide I was struck by the idea that something designed to maim and kill vast numbers of people would be used one day as a way to kill leukemia cells in children. It reminded me of Joseph in the Bible who was sold into slavery by his brothers. He would one day become a high government official in Egypt and would have the power of life and death over those same brothers. When confronted by Joseph, as a ruler in Egypt, his brothers were terrified. But then Joseph said that what his brothers intended for his harm, God intended for Joseph’s good and the saving of many lives.

If scientists can turn a chemical weapon into a drug to help fight cancer in children, what might God do with things that look like they have no good purpose? Since God has all power, He was able to take the slavery, false imprisonment, disappointment and hardship in Joseph’s life and make him national level leader in Egypt and lay the foundation for a nation of over a million people that would come from his family in the future.

It is rational, I think, to believe that the One who spoke everything into existence is able to transform our scars into something beautiful.

The Spirit of the Lord GOD is upon me,
because the LORD has anointed me
to bring good news to the poor;
he has sent me to bind up the brokenhearted,
to proclaim liberty to the captives,
and the opening of the prison to those who are bound;
to proclaim the year of the LORD’s favor,
and the day of vengeance of our God;
to comfort all who mourn;
to grant to those who mourn in Zion—
to give them a beautiful headdress instead of ashes,
the oil of gladness instead of mourning,
the garment of praise instead of a faint spirit;
that they may be called oaks of righteousness,
the planting of the LORD, that he may be glorified.
They shall build up the ancient ruins;
they shall raise up the former devastations;
they shall repair the ruined cities,
the devastations of many generations.
Strangers shall stand and tend your flocks;
foreigners shall be your plowmen and vinedressers;
but you shall be called the priests of the LORD;
they shall speak of you as the ministers of our God;
you shall eat the wealth of the nations,
and in their glory you shall boast.
Instead of your shame there shall be a double portion;
instead of dishonor they shall rejoice in their lot;
therefore in their land they shall possess a double portion; they shall have everlasting joy.
For I the LORD love justice;
I hate robbery and wrong;
I will faithfully give them their recompense,
and I will make an everlasting covenant with them.
Their offspring shall be known among the nations,
and their descendants in the midst of the peoples;
all who see them shall acknowledge them,
that they are an offspring the LORD has blessed.
I will greatly rejoice in the LORD;
my soul shall exult in my God,
for he has clothed me with the garments of salvation;
he has covered me with the robe of righteousness,
as a bridegroom decks himself like a priest with a beautiful headdress,
and as a bride adorns herself with her jewels.
For as the earth brings forth its sprouts,
and as a garden causes what is sown in it to sprout up, so the Lord GOD will cause righteousness and praise to sprout up before all the nations.   Isaiah 61