Highlight: Thank you for praying for Joseph today. God gave him much grace (and energy!) with his fasting and the procedure went well.

Joseph went to the hospital this morning for his blood test, bringing a pair of earrings which he had made for one of the hospital staff. She was very kind and appreciative, to Joseph’s delight. When the results showed that all his blood counts were within the target range, Joseph was allowed to come home for a couple of hours to play. His brothers were pleasantly surprised that he was unusually cheerful and energetic for someone who was tired and hungry – thank you for praying!

When it was time to go back to the hospital Joseph ran to get his shoes on, as though he was going on an exciting outing. In fact, it seemed so exciting that his younger brother Ezra was quite distressed that he wasn’t allowed to go too.

After his procedure Joseph came home grinning from ear to ear. All we can say is, thank you again for your prayers! 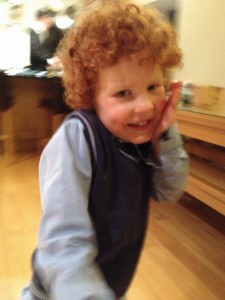 We are praying for Joseph Underwood,
who has survived a life-threatening infection and is undergoing chemotherapy for Leukemia.