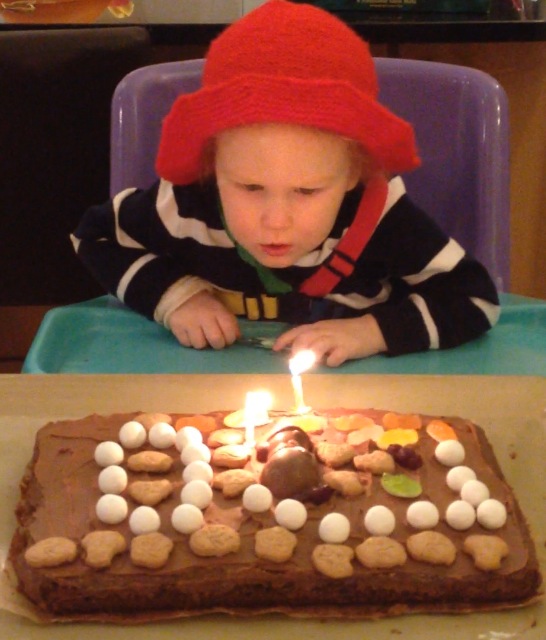 Highlight: Joseph celebrated his second birthday on 1st January and continues to do well with his treatments.

Prayer request: that Joseph would be able to sleep through the night again.

On New Year’s Day Joseph turned two years old. He has become quite talkative now and he was so excited about the cake as it was being made on New Year’s Eve. He was going about saying “Party! Party! Party!” It was a bit hard for him to take in that all the fun would be “tomorrow” but he was able to exercise patience.

You will see in the photo that Joseph received a hand knit ‘Paddington bear’ hat from his grandmother for his birthday. His hair is now very thin on top so the hat will help keep his head warm and remind us of his hair colour.

For the first few days of January, Joseph was taken off his oral chemo to give his body a chance to recover and build up his immune response. He was on 5 days of oral steroids and we are grateful that he has done well. His appetite was larger than normal but he did not have any major emotional melt downs (something that can happen very easily while on steroid treatment). Joseph continues to have a disrupted sleep cycle, usually waking up at least once during the night, needing comfort and some attention to his physical needs.

On Friday the 3rd of January I took Joseph in for blood tests and his immune response was the best since he was first ill. The doctors were pleased with the results and placed him back on his oral chemo.

On Saturday the 4th a couple of Joseph’s great-aunts who live in Canada came to see him. He had a great time visiting and playing. However, he fell over several times in the morning including one time where he hit his head on a coffee table. He was not seriously injured and soon recovered and was just as active as ever.

On Monday the 6th, Joseph went in for another blood test and for chemo treatment in his spine. Joseph was very unsettled the night before and was up much of the night. This made me particularly grateful when his grandmother, Marie, came by the clinic to become familiar with the routine of these outpatient visits. Though he had little sleep and was fasting that morning, Joseph did very well. Once awake from his general anaesthesia, he was ready to walk out! When we left the recovery room and started down the hall he shook off my hand saying ” Me, Me Walk”. And with a slight stagger in his step, he walked on his own all the way across the hospital and out to the car. We continue to be so aware of God’s grace to Joseph, especially on these days. The fact that he has tolerated these procedures so well and is walking (though a bit unsteady) is really just amazing.

Last night Joseph was walking about barefoot in the house and stumbled and caught the end of his toenail on his big toe on the floor. The nail was trimmed but the way he caught it tore the nail back and bent it in half. It then fell back into place and bled a bit. We called the hematology ward to ask for advice and we are now monitoring to see if he picks up a fever. However, once again we were surprised at his resilience. Joseph limped about a bit with his sore toe for about an hour and then carried on as normal.

Tonight is the 9th of January. Joseph is in bed and had a good day – learning activities with Kate and lots of play with his brothers, including time in a large cardboard box that was just the right size for him to sit up inside and have a snack.

Right now our biggest prayer request for Joseph is that he will be able to sleep through the night again. Most nights he wakes up between midnight and 4 am then wants to have dedicated attention or even breakfast. Sometimes he will go back to sleep but other times he seems to be very restless.

There was one other big event on New Year’s Day besides Joseph’s 2nd birthday and that was the 7th anniversary of my marriage proposal to Kate. Seven years ago she said yes, of course having no idea what was to come. But that is one of the wonderful things about marriage – the commitment, a vow to God, that transcends all situations.

I remember being nervous before the proposal. Kate was a wonderful person and I would be very blessed indeed if she would marry me but really, why should she?

Did you ever respect someone or love someone and wonder if they could respect or love you? What if you were not an ideal person – cranky, untidy, maybe even clumsy? What if you were really not very good – you had lied often, cheated, stolen? Could they respect and love you? Or worse, what if you had serious crimes in your life? Could you even tell this person about them? Surely they would never respect you and certainly could not love you.

Well that is one of the things that is so amazing about Jesus. He tells us that He knows us better than we know ourselves, and He is absolutely perfect and pure. Yet, He is willing to enter an eternal relationship with us, giving unlimited love and respect.

Father, I desire that they also, whom you have given me, may be with me where I am, to see my glory that you have given me because you loved me before the foundation of the world. O righteous Father, even though the world does not know you, I know you, and these know that you have sent me. I made known to them your name, and I will continue to make it known, that the love with which you have loved me may be in them, and I in them. John 17 : 24-26